A Fibromyalgia Case Study to Help You Get Relief

A Fibromyalgia Case Study to Help You Get Relief 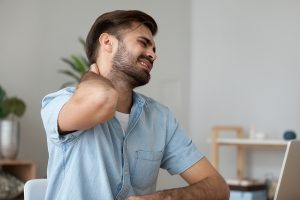 Every chiropractor in Oklahoma City offers natural fibromyalgia relief to patients. People who suffer from fibromyalgia (FM) know for sure how this condition can be so debilitating and incredibly life-changing. Nowadays, more and more people are coming forward for diagnosis.

Let’s have a look at what fibromyalgia is and where you can start getting relief. Would you like to know more vital information about this disorder?

Here are some vital fibromyalgia statistics:

Fibromyalgia is a complex pain disorder that causes sufferers to feel extensive aching pain throughout the body, combined with tenderness to light touch. Along with the other symptoms of FM, pain and tenderness may come and go over time, occasionally on the same day or week.

FM can negatively impact any patient’s physical, emotional, and social life. If you translate the word fibromyalgia, it means pain in the tendons, ligaments, and muscles. Although it has several more symptoms, each one can vary significantly from person to person. A chiropractor in Oklahoma City can help patients cope with the symptoms of fibromyalgia.

Symptoms of FM are different in severity. The most common ones include these:

Chronic and widespread pain affects all parts of the body and varies in intensity. Each FM patient describes the pain differently, such as throbbing, stabbing, shooting, deep muscular aching, and twitching. Furthermore, they also go through neurological symptoms like tingling, numbness, and burning pain.

Most prominent in the morning

It is much more than getting tired after a busy day or caused by a sleepless night. The fatigue associated with FM is all-encompassing fatigue afflicting your personal, social, work, and educational events.

Sleep issues plague those with fibromyalgia. It also prevents them from getting deep and restful sleep.

Aggravates and can worsen symptoms

Healthcare providers usually diagnose FM based on a mixture of symptoms. They ask questions about how the patient feels (fatigue, tenderness, functionality) and the symptoms he or she experiences. They need to rule out other conditions that exhibit comparable symptoms to fibromyalgia. These include:

Fibromyalgia remains a mystery among researchers and the general medical community. However, there are always new clinical findings coming out, and scientists are getting closer to understanding this debilitating illness. Most researchers concur that FM is a disorder of the central processing system in the brain. This system involves neuroendocrine dysregulation and neurotransmitters. As a result, FM patients deal with pain amplification due to the central nervous system’s abnormal sensory processing.

There are some reasons this might occur. It could be due to increased levels of substance P in the spinal cord or low levels of blood flow to the thalamus. Also, a genetic factor might play a role. In many patients, the onset of FM comes after they had an illness or injury.

Further research tries to see just what causes the CNS to malfunction. There is a case study that showed an exciting development. It just may hold the answer to this current mystery and problem. The solution to fibromyalgia that the study suggests involves the help of a chiropractor in Oklahoma City.

A Case Study About a Fibromyalgia Patient

In a case study, a 32-year-old woman had fibromyalgia, chronic pain, fatigue, and depression. She experienced a rapid decline in her vitality and overall health. After two years, the patient began to see an upper cervical chiropractor.

Upon examination and getting an in-depth look at her medical history, the chiropractor discovered that she suffered a misalignment in the bones of her upper cervical spine. She received adjustments for eight times over the next six months to keep her bones in proper alignment. She already noticed an improvement after her very first adjustment. By four months, she noted that her symptoms were almost all gone. After the completion of her upper cervical chiropractic care, she was delighted to report that her fibromyalgia symptoms were all completely gone.

An Upper Cervical Chiropractor in Oklahoma City Can Help

There is one reason for the central nervous system to malfunction. It can happen if the top bones of the upper cervical spine are out of alignment. Such misalignment puts pressure on the brainstem. Instead of protecting the brainstem, the atlas (C1) and axis (C2) vertebrae can negatively impact it and cause it to malfunction. Thus, improper signals reach the brain. Furthermore, the brainstem can tell the brain that there is severe pain even when there is no pain at all. Thus, fibromyalgia becomes the result.

At Precision Chiropractic in Oklahoma City, OK, we help our patients get to the root cause of their fibromyalgia. Our upper cervical chiropractor also uses a similar technique as the one in the clinical study. Thus, we also produce the same positive results. Why not visit us for an evaluation, soon?